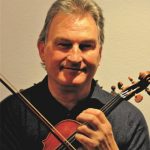 Melbourne-born violinist Brian Finlayson studied in Melbourne with Brian Blake and Dorothy Gleadall.  He undertook further studies with Valery Klimov (a student of and successor to David Oistrach) followed by studies in Cologne from 1980 to 1983 with Igor Ozim, the Amadeus Quartet and Günter Kerr, performing concerts and touring throughout USA, Canada, France and Germany as a soloist and member of the Heidelberger Kammerorchester.

From 1983-1990 Brian was a principal teacher of violin and viola at the Victorian College of the Arts and taught at the Melbourne State College and Victorian Education Department.  During this time he founded two youth Chamber Orchestras, the Australian String Ensemble and the Junior Strings of Melbourne, who gave successful tours throughout Japan, Europe and Australia. In 1989 Brian was awarded the Advance Australia Award for achievement in Music in Australia.

On return to Europe in 1990, Brian took up a tenured teaching position as Professor of Violin, Viola, Chamber music and Chamber Orchestra at the Carinthian State Conservatorium in Klagenfurt, Austria. In 2008 he was appointed Head of Strings and currently directs the department with 12 teachers and 300 students.

In 1990 he formed the Conservatorium-based Ensemble Kammerakademie which has performed throughout Italy, Austria, Slovenia and Germany

In 1991 he formed the professional Orchestra Academia Ars Musicae Chamber orchestra comprising principal players from orchestras in the Alpe-Adria area (Italy, Austria and Slovenia). The orchestra has toured extensively and is one which Brian directs from the concertmaster chair.

Brian collaborated in Cologne, Jerusalem and New York with Isaac Stern, the Julliard and Emerson Quartet’s, Leon Fleischer and others at Sterns’ Encounter chamber music courses in 1999, 2000 and 2001.

In 2012 he received the Carinthian Cultural prize for achievements in music in Austria.

He has taught all over the world, including the USA, throughout Europe, and recently back in Australia. He sits on National and International violin and chamber music juries.

A number of students are professional members of internationally-renowned string quartets including the Acies Quartet, Adamas Quartet and Fegus Quartet, and others hold tenured teaching positions at the Carinthian State Conservatorium and Graz Conservatorium in Austria, the Porto Conservatorium in Portugal, as well as music schools across Europe, in Thailand and Australia. More about Professor